VIDEO: Adding Glow in the Dark Details with Jenny

It's Jenny here, and today I have a fun card that uses the WOW! Embossing Pen with the brand new WOW! Galaxy Glow embossing glitter. 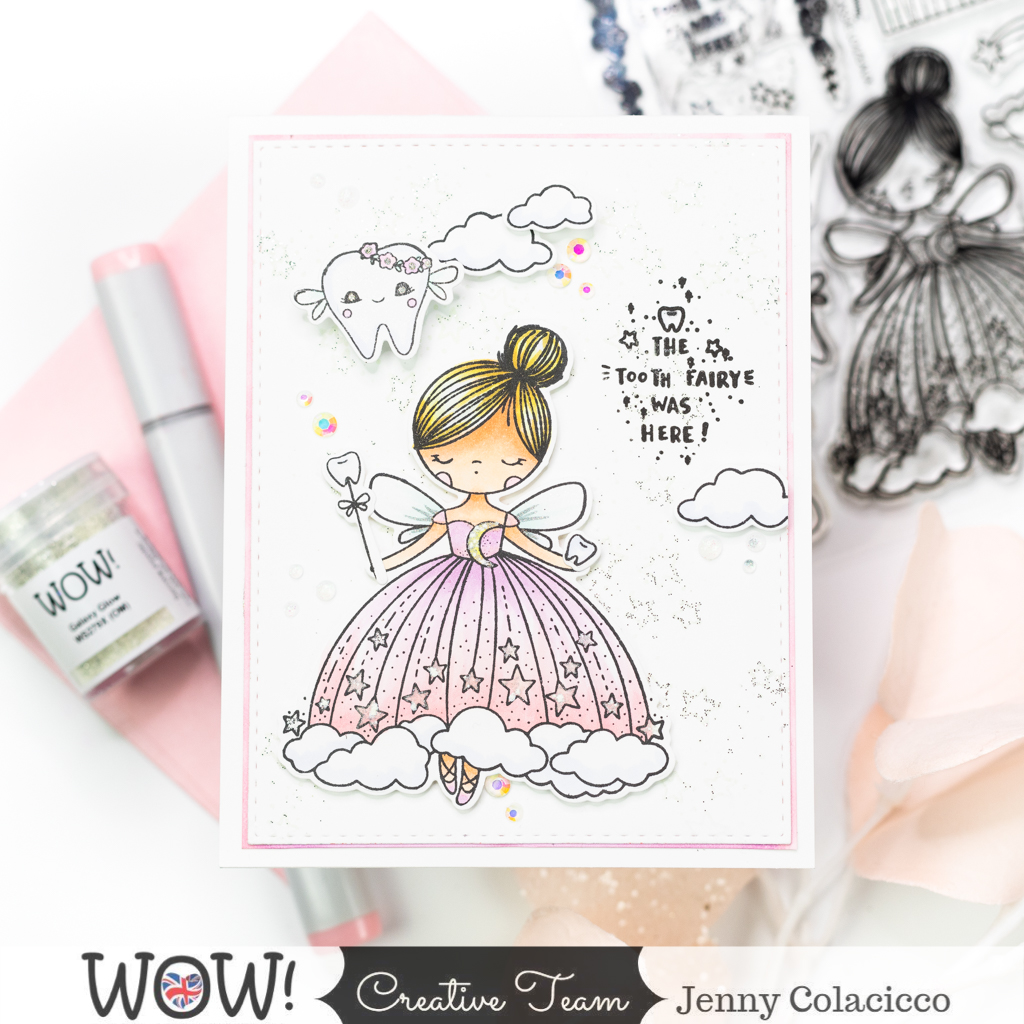 I have a video showing you how I created this card which you can check out on the WOW! Embossing Channel or here:

Galaxy Glow is such a cool embossing powder. It's got chunky glow in the dark powder, which glows green when you turn out the lights, and appears white/clear on cardstock - but this one is a little different to the other WOW! Glow in the Dark powder - it's also a glitter, so it has little flecks of silver that show up wherever you heat emboss it.  So you can see it in the natural light too! 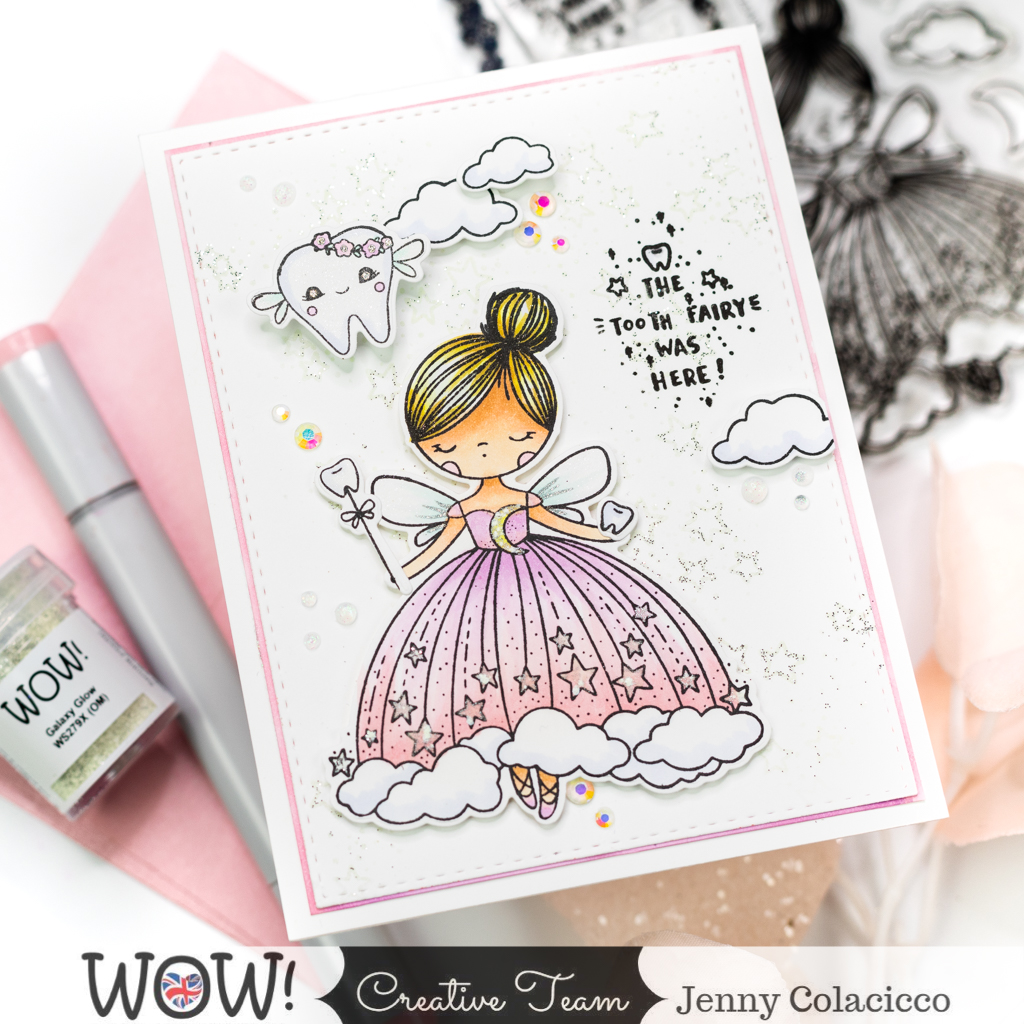 I decided I wanted to pick out parts of the image with the glow in the dark powder to create a fun accent - using the WOW! Embossing Pen.  This Waffleflower Toothfairy image was just perfect - lots of pretty stars on her dress to color in!  I stamped the image in Permanent Black ink which was Copic safe, then colored in the fairy with pale V, R, RV and BG Copics, as well as pale G for the wings.  I colored the face and arms in E colors, and added pale blue to the tooth and the clouds. 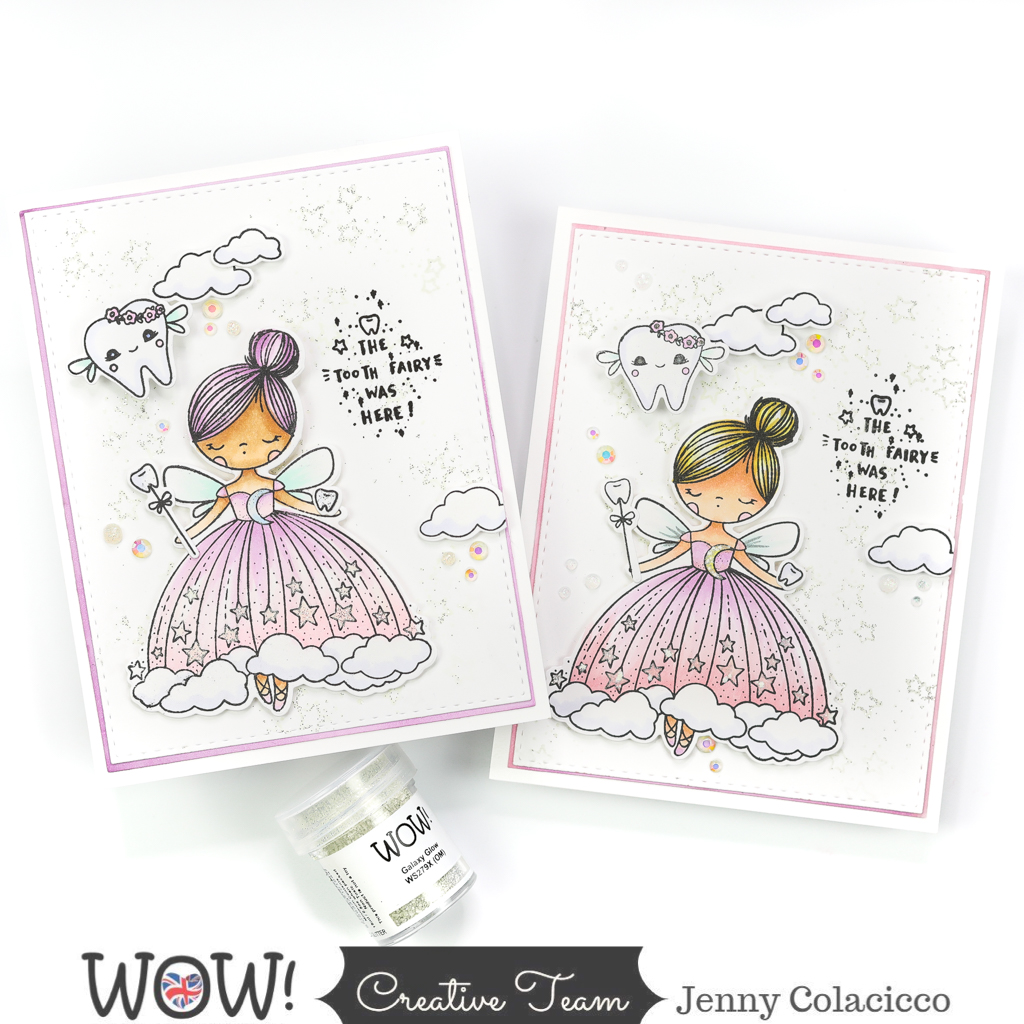 I picked out the stars with the pen and heat embossed with the Galaxy Glow.  I also stamped a star background on white cardstock and heat embossed with Galaxy Glow. I die cut the background with a stitched rectangle die, and all of the images with the coordinating dies.   I then put my card together with foam tape and liquid glue.  The sentiment was stamped in black pigment ink directly over the embossing.

I popped the panel over cardstock I'd edged with a coordinating Copic before popping it up onto a white notecard.  For some extra sparkle I added iridescent rhinestones and glitter drops.

Check out how pretty this looks in the dark (apologies for the blurry photo. It's really hard to get a good shot in the dark!) 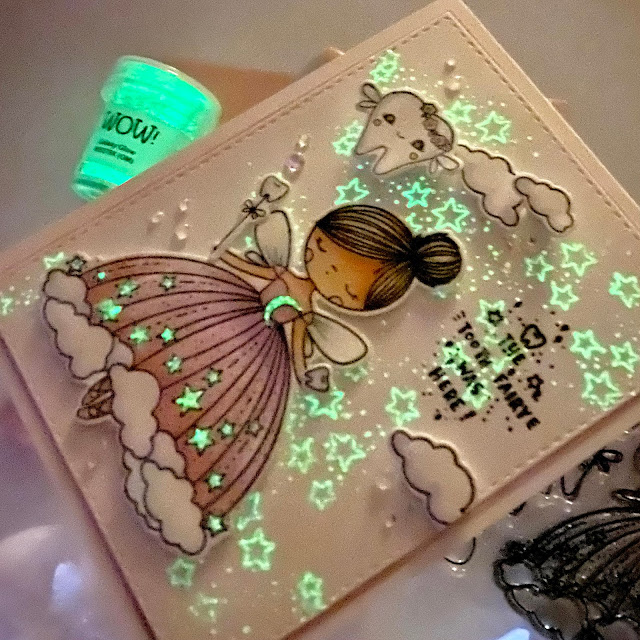 I'm super excited to give this to my daughter Ruby - she's lost two teeth in the last 6 months and so can't be too long until the next! 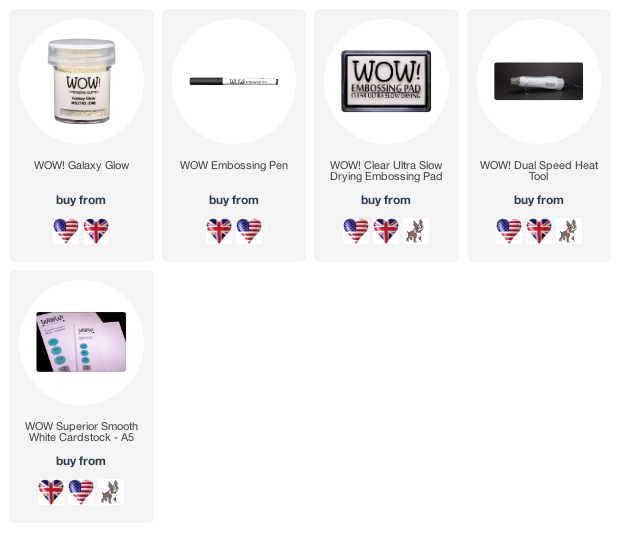 Popular posts from this blog

It's Sarah here with today's blog post created for our Monochromatic theme.


I don't know about you, but I always find I need to use stamps from a mixture of stamp sets and I thought it would be easier if I didn't have to slide each stamp set in and out of the packets all of the time.

I have a bunch of empty CD cases that I had almost thrown out but thankfully I hadn't as they turned out to be the perfect solution! The part that holds the CD easily popped out so I could then position my different stamp sets within them.

I found an old wooden CD box but it had no lid and as all clear acrylic stamps are best stored out of the light, I decided I would make a box lid for it... not just a plain lid though... a Wow Embossed box lid!


Here are brief instructions on how to make it:

Using pearl silver card, I created a square to the size that I needed (145mm) and added 30mm wide rectangles around the square adding in some t…
19 comments
Read more

By Jo Herbert September 15, 2020
We are collaborating with both Stencil Girl & Seth Apter for a two-day blog hop. Today is the first day of the hop.
GIVEAWAY A $35 Gift Certificate to StencilGirl® Products, a $35 Gift Certificate to Seth Apter’s Shop AND a $25 Gift Certificate to Wow! Embossing Powder Enter to win by leaving a comment below. Then be sure to visit the other blogs in the hop and comment to win. The more blogs you comment on, the more chances you have to WIN! Three winners will be chosen at random from all blog comments! (One comment per blog please.) You have until Wednesday, September 23rd  at 11:59PM Central Time to leave your comments. Winners will be announced on Thursday, September 24th.
Head over to Day 2 that starts tomorrow on the Stencil Girl blog. Line UpJaine
Riikka
Heather
Carissa
Amber Jo


Connect With Us: Info Site: www.wowembossingpowder.com

By Jo Herbert April 17, 2020
#spreadjoynotgerms
Official Blog Hop
We are playing along this fabulous blog hop that both Catherine Pooler and  Alexandra Stapleton- Smith has organised.
Some of our fabulous design team members have made you some wonderful creations for you today even our very own Marion Emberson. Please visit the list below of our Design Team members.
We are really excited about spreading inspiration and joy to all of the fellow stampers that are home, alone, anxious...or just bored!
We are so excited about this hop!  We have 31 sponsors and 153 bloggers participating.  We’re about to spread a whole lot of joy to those that are doing their part, staying home and NOT spreading germs!  WOOOT! 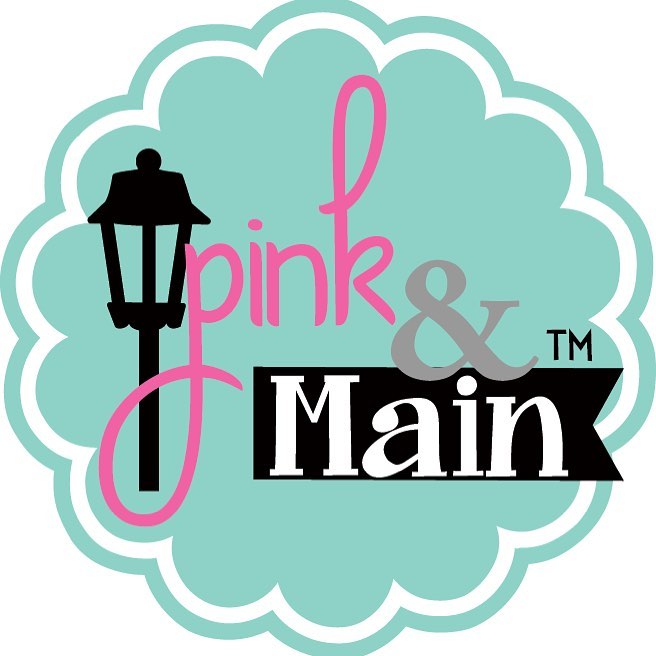 Available from WOW! at fabulous prices