Posted by HandmadeByTasha13 on September 30, 2022
Hey crafty people!
It's Tasha here, and I'm excited to be sharing some inspiration using WOW products with some gorgeous Birch Press Design goodies as part of a collaboration hop we are running!
(The hop itself is over on Instagram, so be sure to check that out for the chance to win a voucher for either of these fabulous companies!) 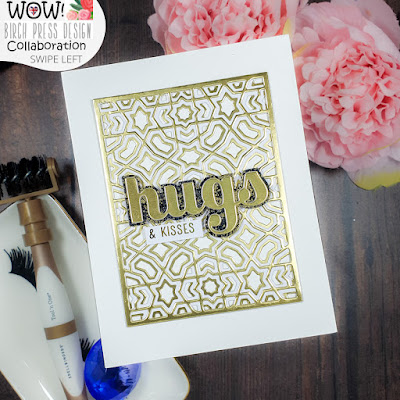 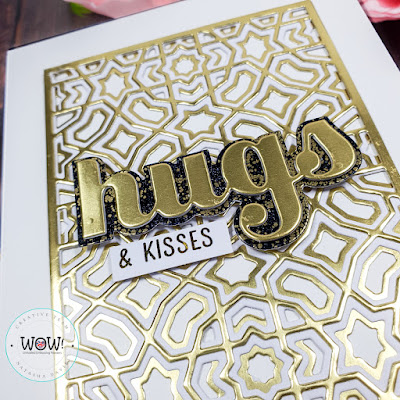 1. Cut the three separate pieces that make up the Grandiose Bevel Layering die set; top and bottom pieces from Gold Mirror and the middle layer from WOW Superior Smooth white cardstock.
2. Using your choice of adhesive, glue the three pieces together and leave under something heavy whilst it dries.
3. Emboss a piece of WOW cardstock in Midnight powder, from my Moonlight Trio and now available in a stand-alone pot.
4. Die cut the shadow layer of the Hugs Sugar Script die from this Moonlight piece and the letters later from the same Gold Mirror cardstock. (To add dimension, glue a couple of extra word die cuts behind the Gold one and then adhere to the embossed shadow.
5. Adhere the layered Grandiose Bevel piece onto the centre of an a2 panel of Neenah 80lb, then add the 'hugs' die cut to the centre of that.
6. Foil the 'hugs & kisses' sentiment from my pack of Fab Foilers Sweet Sentiments in Bright Gold. Then trim the hugs portion off and add it below the die cut 'hugs' with some strips of scrap cardstock behind for additional dimension.
Simple, but effective! 😍 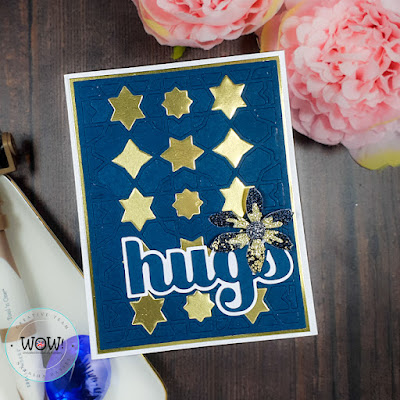 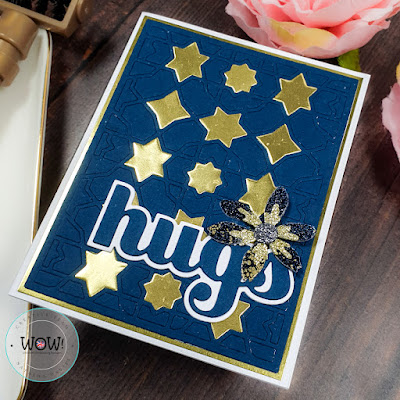 1. Die cut the top, most detailed layer of the Grandiose Bevel set from Navy Blue cardstock, carefully keeping the negative pieces as you'll need those for this next bit!
2. Adhere the Navy, positive die cut onto some scrap cardstock and carefully add the Gold pieces into the main 'star' type shapes running down the centre. (These are the pieces leftover from that last card!)
4. Now, fill in the empty spaces with the Navy pieces.
5. Adher that whole die cut inlay piece onto a piece of the same Gold Mirror cardstock, before trimming that down to give a nice, neat border all of the way around.
6. Cut the shadow for the 'hugs' die from WOW white cardstock and then add a triple thick die cut of the Navy cut word die.
7. From the Midnight embossed leftovers from the last card, cut the largest flower piece and set aside.
8. Cut the detail layer from WOW cardstock with double sided adhesive on the top of it. Peel back the reveal and add Gold Dust Sparkles for some extra glitz!
9. Assemble the 'hugs' and flower onto the die cut in-lay panel.
I added this to a mini cardbase made from WOW cardstock so that the white, word shadow will match the white of the card 😉
Don't forget to check out Instagram to enter the competition
As always, than you for spending this time with me and I hope you like the projects that I made?!
Have a wonderful, safe & happy week!
Stay Crafty!
Byeeee!
Affiliate links are used
Connect With Us:
Info Site: www.wowembossingpowder.com 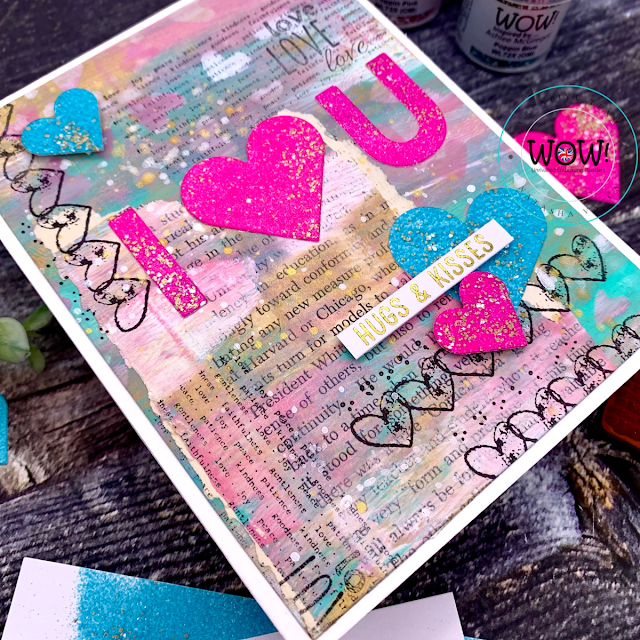 Hi everyone!  Welcome back!  I am excited to be back on the WOW Blog today sharing another idea using WOW products to create a mixed media styled card!  Today's card features gelli prints, stencils, stamps, and embossing powders!  So let's get started!   For today's card I started with a gelli print from my stash!  I have shared with you on prior posts I love to create backgrounds and have them on hand!  It is a fun and relaxing afternoon to make a bunch of backgrounds and helps when creating cards later on too!   On the gelli prints I created, I added the WOW Stencil - Sprinkled Hearts to my prints!  I love this stencil and the added texture this provides to the print.  I also added a piece of old book paper made from a gelli print.  I ripped the print and then glued it on top of the gelli print with the stencil.  I added this with a glue stick and then applied clear gesso on top.    Next I added some stamped images to my background.  I used a combination of a heart stamp 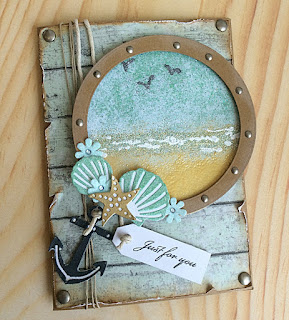 Good morning crafty friends, I hope you're all well and getting very creative this month! As this month's challenge is summer and I live on an island it seemed only natural that my inspiration card would feature sea and sand. To create my beach scene I started off with a piece of pale blue card and a rubbed a Clear Ultra Slow Drying Embossing Pad across the top several times. I then sprinkled WOW Peppermint Tea Powder and Under The Sea Glitter over the top, tapped off the excess and melted with a heat tool. I created the sand underneath using Gold Pearl Powder. For the sea I ran a line of PVA glue in the middle of the sky and sand with my finger, sprinkled with Under The Sea Glitter and melted with a heat tool. For the waves I added small areas of PVA straight from the nib of the bottle when added Opaque White Powder. The birds and sentiment I have used Opaque British Summer Powder which is one of my favourite new powders, great colour and great name! 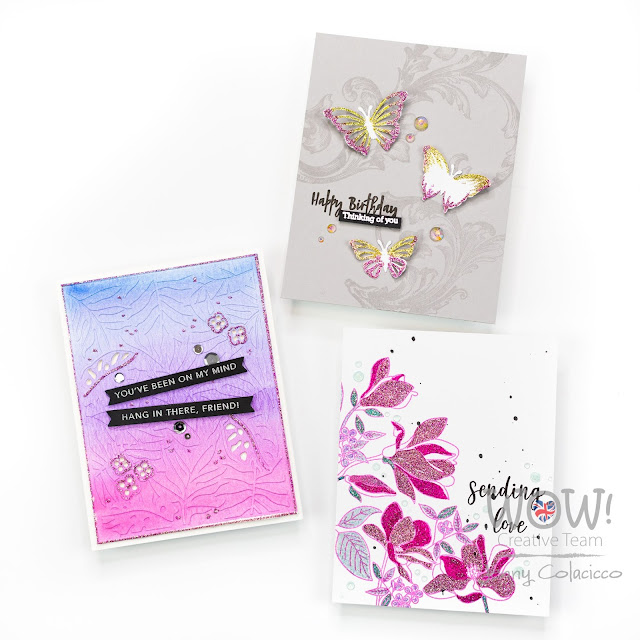 VIDEO: Three Ways to Use an Embossing Pen with Jenny Colacicco

Do you have the WOW! Embossing Pen?  Even if you do, do you know what to do with it? Well, if you have been wondering, I can help. I have three different ways to use the embossing pen in today's post and for me it was a game changer.  I've had the pen for a while and just never picked it up except to maybe add a dot of ink where I hadn't fully heat embossed. The techniques I'll show you today (and there's a video!) will make this pen a must have tool in your craft room! My cards also feature the newly released Gemstone Trio embossing glitters (and some other recently released powders now available). I'm going to show you how I created these three cards, all of which feature a different way to use the pen - you can watch the video below or over on the WOW! Embossing You Tube channel (and be sure to hit subscribe while you're over there! Highlighting Dry Embossing For my first card, I used the pen to highlight some areas on a dry embo