Hi Chris Saunders here again this time with a Spooky "Glow in the Dark" Halloween Card.

﻿
﻿ This card was made using an 8" x 6" black card. I stencilled through a cut out circle at the top of the card with clear pigment ink then added Violet Pearl Embossing Powder. On top of that I then added Bright White in patches to create the shining moon. I then added chalk around the outside too for a moon-glow.

The bottom of the card was made by swiping my ink pad over the surface and adding Bright White Powder then Verdigris then Pepper. This gave a varigated look to the ground. I then added a church cut out from black cardstock to the top right of the card which I also added chalk to to make it stand out from the black background. 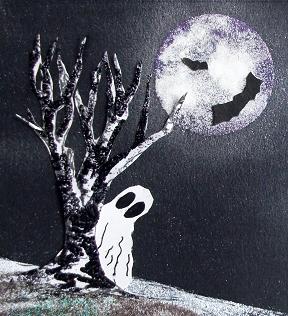 The next step was then the tree - I inked up a tree stamp with Ebony Regular Black powder on white cardstock. Once heated I cut the image out and then added the ghost  which was drawn onto white card and placed so that he is peering from behing the tree.

The Glo-in-the-dark element of the card was made by inking a piece of white card and adding 3 layers of Glo in the Dark powders. The doors and windows were cut out and added to the church image. The frames and door details were just marks made with a black pen.  The eyes and mouths of the pumpkins were also cut out from this Glo-in-the-Dark embossed cardstock.

The pumpkins themselves were  made using Clear Gloss powder mixed with Orange Flock which gave a realistic orange skin to the pumpkin. I heated both powders after mixing them up in a melt pot and poured them onto a silicone craft mat to dry. One large circle and one smaller circle.   The eyes and the mouth of each pumpkin were stuck on with PVA glue.
The Spooky sentiment was made using stickers and last but not least the little bats were cut out from black cardstock and stuck over the moon to add a bit more drama to the card.

This card was great fun to make and if left in the light then moved into the dark the windows, eyes and mouthes of the pumpkins will glow.   Great for kids at Halloween.

By Christine's Craftyart Blog at September 19, 2012

Hello, it's  Verity  with another video and blog post as a Creative team member for WOW! When someone says emboss resist, you are more l... 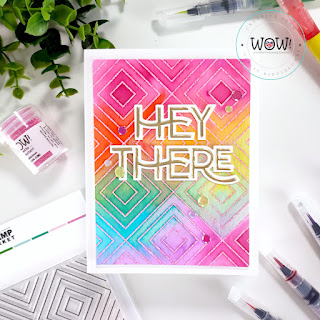